A Message from Dr. Rebecca Housel about COVID-19 and Future Appearances:

In accordance with public health and safety recommendations from the U. S. Centre for Disease Control (CDC), events scheduled after February 2020 (through 2021) have been cancelled or postponed until further notice. This includes my appearance at Boston Comic Con with Chris Evans and Chris Hemsworth, my talk on artificial intelligence and big data in cancer research for Elsevier (Boston), as well as my paper on neurogenetics and mental health at University of Sheffield (UK). Boston Comic Con has been cancelled. The Elsevier conference, scheduled to reconvene 15-17 November 2020. has also been cancelled. The talk at Sheffield was released on video in May 2020 and made available for paid viewers for 30 days. The Cinema St. Louis event was moved to September 2020 and took place via Zoom. All other appearances listed below for 2020 and 2021 will be reviewed when travel is again possible. Until then, please stay safe.

During this difficult time, I'm sending healing, light and positive energy around the globe. We're all in this together. Try to stay calm and focused. As long as I still stand, so does RebeccaHousel.com. That means you are among more than four-million readers and 77,000+ subscribers from 151 countries. It also means you're never alone. 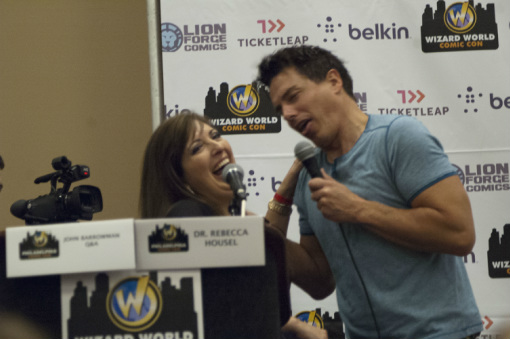 THE POP CULTURE PROFESSOR is the featured guest on LA's THE EVENT HORIZON with Gene and Susan of KRYPTON RADIO, 6/8/13: http://kryptonradio.com/2013/06/08/the-event-horizon-dr-rebecca-housel-the-pop-culture-professor/

Dr. Rebecca Housel, The Pop Culture ProfessorTM, is interviewed by DaveAC and The 6th Doctor on the UK's CULTDOM COLLECTIVE, November 20!

300th Episode with Ramblin' Russ on May 7, 2012
http://ramblingruss.libsyn.com/ramble-with-russel-300-6th-anniversary-special-live-on-talkshoe

2011:
September: NYC! Wedding bells were in the air...there's nothing like a crisp fall day in the big apple. Hope to be back soon.

July: Chicago! Home of Wrigley Field, this historic city is one of my "Magnificent" favs....

June: The Pop Culture Professor appeared at Nick's Comedy Stop on Warrenton Ave. in Boston...watch the below YouTube link of her 20th Anniversary Performance! And for more info on Nick's, check out: http://nickscomedystop.com/
http://www.youtube.com/watch?v=Fb56C9jXiV8

April: DC! Great city with even greater fans...go NATIONALS! In the words of the inimitable Governator: "I'll be back."

Boston, MA at the Prudential Center Barnes and Noble on Friday, October 9th from 5-7pm. Contact Maura Clune for more information at 617-247-1914.

Related Twilight-Talk on Friday, October 9th at Canton High School, Massachusetts. Rebecca attended CHS from grades 10-12 and fondly remembers inspirational teachers like Mr. Roache, Mr. Farrell, Mr. Ringuette, Mr. DePasquale, Mr. Feerick, and many other talented educators. It was with Mr. Roache and Mr. Farrell that Rebecca received first outside confidences in her writing; though Rebecca had been writing and selling her work from the tender age of six (going door-to-door with an old briefcase), this kind of support and encouragement from trusted educators was invaluable.

Buffalo, New York at the Amherst Barnes and Noble on Saturday, October 24th from 6-8pm. Contact Dawn Everest for more information at 716-837-7403.